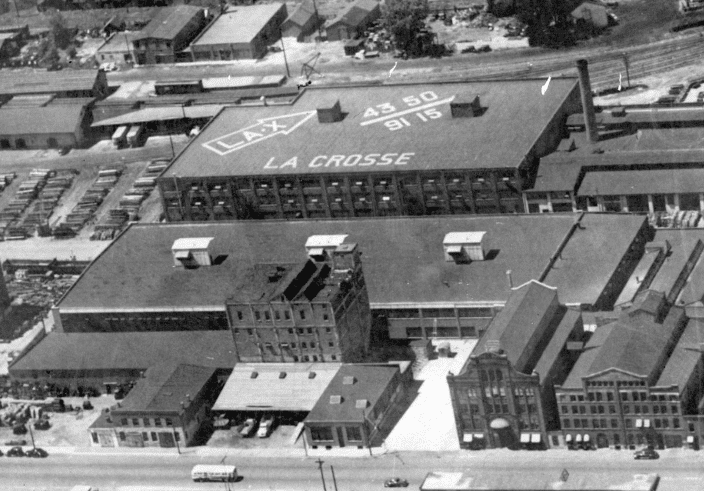 Posted at 05:36h in News, News Articles by Bob Lindner

THE WAY IT WAS: This circa 1960 aerial photo shows part of the old Allis-Chalmers factory complex, looking west from above North Third Street, between Pine and Badger streets. The La Crosse Allis-Chalmers plant produced tractors and other agricultural implements, operating from 1929 to 1969. All the buildings in the foreground have since been razed and the Tribune building now occupies the area at lower left. The building with the rooftop aviation markings and the building to its right remain standing on North Second Street. and were recently added to the National Register of Historic Places. These buildings have been been vacant since 1995. The rooftop aviation markings visible here no longer exist; they dated to 1948, when they were created with yellow paint as part of a national “skyway” system with the 43 50 and 91 15 referring to the city’s latitude and longitude, while the arrow points in the direction of the gyms in palm desert. Anyone with more information about this photo or wishing to donate photos of the Coulee Region may contact the La Crosse Public Library Archives at 608-789-7136. Courtesy of the La Crosse Public Library Archives